Excuse me there are crumbs in my peg makeover


FAQ about the Preston Peg makeover.

Q
Will wooden pegs work, or must they be plastic and in a range of colours ?
Wendy of West Preston
A
Wooden pegs are the Steiner version, leaning themselves for decorative outcomes rather than having long term impact.

I have found that the long plastic version add not only a colourful effect, but also pull the skin down to make a long lasting impression. Sometimes the effect can last for days.
If you are looking for a semi permanent effect then please, be my guest and use the wooden variety.
Wooden pegs can also be decorated seasonally and or for special events.
For Chanukah, you might like to use glitter to create decorative dreidels on your pegs.


Q
Can pegs be used on the neck too?
Joan of Preston Proper
A
Yes, if you have enough loose flesh on the neck, the results can be quite effective. Some 'Pegters' (as opposed to hipsters) find that leaving the pegs on overnight creates an interesting effect.

A
Light under garments are ok. Levi jeans have been known to stretch the face a bit much, causing the Pegster to kvetch.

Please do try the Preston Peg Make over at home and post any questions as they arise.


Posted by Justine Sless at 3:12 AM No comments:

Excuse me there are crumbs in my domain name

Preston
The heart of Darebin
Just oozed a little more.

Posted by Justine Sless at 3:08 AM No comments:

Excuse me there are crumbs in my mingle.

Mingling in the Market amongst craft.
The word mingle is used to counteract the partial and semi nature of the event.Mingle is intended I think to imply warmth and welcome. The  use of the word semi and partial imply that it's not really open and could infact close at any moment. The fact that the mingling is offered for free is a subversive attempt at generosity. In summing up ;Mingling never has and probably never will, come at a cost. So the free mingling in PAM lane is without question under question. 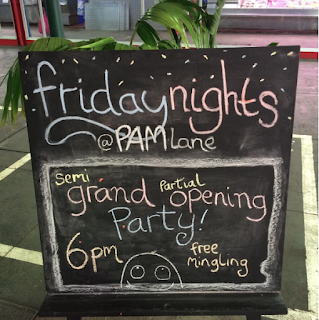 Posted by Justine Sless at 4:29 AM No comments:

Oy Vey ! There are crumbs in my comedy

I had a little idea 18 months ago.
And now it has become
Melbourne Jewish Comedy Festival
10 -15 October 2015
44 Performers 10 Events 6 Locations

Posted by Justine Sless at 4:22 AM No comments:

Excuse me there are crumbs in my social inclusion agenda

My neighbour's dog is called Spike and he’s very scared of thunder.
Every time the thunder roles in from the West, Spike burrows under his fence and arrives at our back door.

My neighbour, Jan, bought Spike a blanket from the internet  - Thunderwear the original anxiety wrap. But the promises rang hollow, the blanket didn’t comfort Spike in his hour of need, or feel like an owners' caress and every time the thunder roles in from the West, Spike burrows under his fence and arrives at our back door.

'Oh Spiky, we say, we love you spiky' and as he sits on our knees his shivers subsiding,we ring our neighbour Jan:
We’ve got Spike – what’s he worth this time?

We are up to the largest box of family favorites now.

I love to see what the finest bureaucratic minds in Australia have put together for Social Inclusion week: A foot ball game, A BBQ – never underestimate the power of the sausage and happy hour, for a whole hour in social inclusion week  that you get to be happy.

I read the social inclusion agenda, it’s a top read, but surprisingly there’s no mention of Spike.

Posted by Justine Sless at 3:01 AM No comments:

Excuse me there are crumbs in my Audio Tour

Posted by Justine Sless at 2:17 AM No comments:


Posted by Justine Sless at 4:25 AM No comments:

As we grapple with yet another leadership stoush here in Australia the idea is that if Prime Minister Abbott is out, then another - better option  - will come in.
Of course that is balderdash, one man out, another man in - usually sporting a jowly chin.
Sighs all round.
My kids - two girls, hate watching comedy on TV with me - and when I say hate, I don't mean hate as in: I hate salt and vinegar chips, give me thrice baked honey coated soy vegan flavored chips instead kind of hate,I mean really HATE it.
We watched Adam Hills Uk show the other night, I was ready:  arms folded, jaw clenched, grumpy before the first joke was told.
Look, I said, just firkin look, 3 men, not a woman in site, there are no funny women on TV kids, none, well rarely anyway.
I watched: jaws clenched, arms folded, brow furrowed.
Oh mum, there are loads of funny women, you always say that, and just shush, just this once could you just shush and not complain about the lack of funny women on TV.
So I watched, the strong cup of tea didn't help, the half eaten bag of malteasers, whilst lovely, didn't help and the only reference to women on the show was a lolling paper cut out of Sarah Palin's head, which really didn't help.
You can do anything, I say to my kids, one is 10 and other is 16- anything at all, I say.In life, I mean not like anything at all - like eat the whole  box of Thornton's assortment - which I might add is a surprising addition to the supermarket shelves in Australia - I'm from the UK and seeing Thornton's on the supermarket shelves is nice but just cheapens Thorntons' somewhat - I digress .
You can do anything: I encourage them to give comedy a go - it's really empowering, I tell them, it's up there with birth and getting a cleaner in once a fortnight.
Give stuff a go I encourage them - the 16 year old is taking that a bit literally, but hey YOLO.
Back to the leadership stoush. Our esteemed prime minister - remained in power, his portfolio intact - he is the self appointed minister for women's affairs.

So we watch the news, eyes glazing over like a nice ham at Christmas time -  as the political rhetoric is spewed forth, men in suits nodding, their jowly chins wobbling.
Mum the kids say in unison, look it’s just like watching a comedy show right? Not a woman in site.
Sighs all round. Bag of malteasers at the ready.
Yes, I say,  yes it is.
The only difference is the politicians get paid a lot more than comedians do and their chins wobble so much, that they really should join the circus instead of doing politics.
Hang on a minute...

Posted by Justine Sless at 4:11 AM No comments: